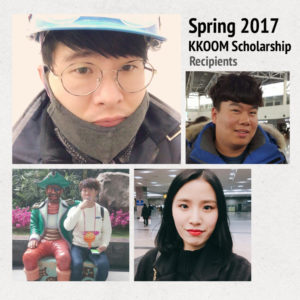 During the spring 2017 semester, KKOOM was proud to provide college scholarships to four students in South Korea, all of whom grew up at Samsungwon, an orphanage in Gumi. We accepted 2 new college recipients and awarded scholarships to 2 continuing recipients. Every semester, we ask our recipients to provide a brief update on how they’re doing and what they hope to accomplish this semester and in the near future. Read below to see what they had to say.

Yeonhwa, 2nd year, at Yeungjin College, Major: Business Management. KKOOM is happy to continue supporting Yeonhwa’s academic studies as she hopes to start her own business in the future. During her vacation, she enjoyed company events at her full-time job such as New Year’s Party, employee workshops, and a picnic. In five years, Yeonhwa sees herself as a 27 year old with a stable life in a steady job, striving for a successful life. With KKOOM’s financial support, she has more opportunities to give back to those who are less fortunate and she is thankful for the support. She wants to live with a positive mind and more dignified life. Yeonhwa says “I love KKOOM supporters and stay healthy.”

Mingyu, 2nd year, at Gumi College, Major: Hospitality and Cooking. Mingyu hopes to become a chef or baker. KKOOM supported Mingyu during his 1st year in college. In his spare time and during his vacation, he practiced his baking skills. He is very optimistic about the future; even if there are setbacks, he wants to continue building up his career to pursue his dream. He really appreciates the help from KKOOM.

Minyeal, 1st year, at World Cyber University, Major: Pastoral Studies. Min-yul is a non-traditional student, who spent several years working in factories and small businesses after he aged out of Samsungwon. In 2015, thanks to KKOOM supporters, like you, he had the opportunity to travel to the US with a couple of other grown-up Samsungwon young adults. This travel experience helped inspire Min-yul to pursue a college degree. In his own words, Min-yul’s dream is to become a global praise minister who is following God’s will. His reason in choosing his major is to know the word of God more deeply. He is very happy when he sings praises to God. Through his studies, he wants to learn how to pray and learn more about the Bible. Min-yul’s hobbies are to sing worship songs and stay fit.

Yonghoon, 1st year, at World Cyber University, Major: Social Welfare. While living at Samsungwon Orphanage for 14 years, Yonghoon says his mother and brothers and sisters helped him a lot, even though his grades weren’t very good growing up. Since they took such good care of him, he wants to pursue a social worker license. His dream is to become a social worker, and he currently has three computer certifications. He is willing to learn new things, study hard, and listen to the professors’ lectures. He says with enthusiasm, “I would like to thank you for your support to me. I think it will help me a lot. I sincerely hope that my dreams will thrive.”