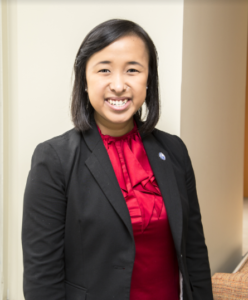 ne 4, 2017 – According to Forbes, 77% of nonprofits lack a leadership transition plan. This, however, is not the case for Korean Kids and Orphanage Outreach Mission (KKOOM), a Michigan-based 501(c)(3) organization.  KKOOM’s leadership transition has been years in the making, growing from an all-volunteer-led organization over the last 10 years to positioning itself to be able to hire a full-time chief administrator, Grace Lee, who started at the end of May. She is charged with implementing a strategic growth and fund development plan,  to ensure that KKOOM can continue to improve the lives of orphans in South Korea for years to come. In addition to leading fundraising efforts, Grace will also be managing the day-to-day operations and overseeing KKOOM’s programs and volunteer projects.

“KKOOM started as a grassroots endeavor in 2004,” stated Leanne Stein, KKOOM Secretary and founding board member. “At that point, it wasn’t even ‘KKOOM;’ it was just co-founders Aimee Jachym and Erika Senneseth collecting and buying goods for kids at orphanages in South Korea. Eventually it got too big and that’s when KKOOM was born in 2007. We’re excited that KKOOM is ready for more growth once again and that we’ll be able to help improve the lives of Korean orphans long term.”

In accepting the position, Lee said, “I’m so grateful to the KKOOM board, and friends/volunteers of KKOOM. This is an amazing opportunity to serve a vulnerable population of children. I wouldn’t be where I am today without the support of a community that has loved and believed in me; I want to continue rallying behind these kids with the same confidence to create a longer, lasting impact to make a difference everyday.”  Lee will report to Jachym, who will continue to serve as KKOOM’s President, a volunteer role she has held since the organization’s establishment.

Lee is 2nd generation Korean-American and is from Stockbridge, Georgia. While living in Sejong, South Korea, as a 2015-2016 Fulbright English Teaching Assistant, she volunteered at the 2015 KKOOM Christmas Party. Since then, she has actively advocated for KKOOM’s mission as a volunteer and board member. She graduated from Georgia State University with her Bachelor’s degree in Public Policy, Non-Profit Leadership concentration. She has a strong passion to serve children, as a former pre-school teacher and Elementary English Teaching Assistant to 600 students with the Fulbright program. She also has traveled to Jamaica, Nicaragua, and Tanzania on service trips visiting orphanages, planning Vacation Bible School activities, and sponsoring primary age children to attend school in Arusha, Tanzania.

About KKOOM – Korean Kids and Orphanage Outreach Mission (KKOOM) supports orphanages throughout South Korea with the mission of improving the lives and livelihoods of Korean orphans through outreach, enrichment, and education. The acronym “KKOOM” (pronounced “koom”) also means “dream” in Korean. KKOOM was founded in September 2007 by former Fulbright grant recipients as an extension of an ongoing volunteer project at Samsungwon, an orphanage in Gumi, South Korea that began in 2004 and continues today. KKOOM now provides volunteer resources and aid to orphanage homes throughout South Korea and operates U.S.-based educational initiatives that engage supporters firsthand with the work being done overseas.