Improving the Lives of Korean Orphans Through Outreach and Education 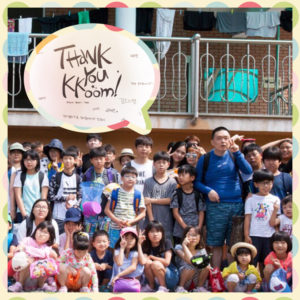 The Samsungwon family had a wonderful summer thanks to your support!

Well, the kids at Samsungwon, an orphanage in Gumi, South Korea, are all back in school now, but the summer was sure a memorable one. It was one of the hottest summers in recent history here in Korea, but thanks to your help, KKOOM was able to help keep the children cool by sending them on two different overnight trips.

In late July, the children went to to Caribbean Bay and Everland, a large water and amusement park famous here in Korea. The kids enjoyed the water park on the first day and the amusement park the next day. There were plenty of fun activities for all. KKOOM funds provided the round-trip bus transportation and also purchased swimming suits, life jackets, tubes and water shoes. A big thanks, especially, to those who helped by contributing to our special summer fundraising campaign to support these activities. 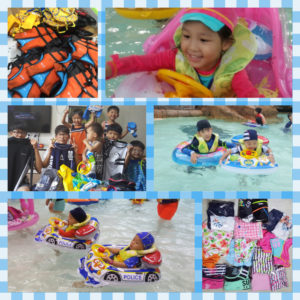 The Samsungwon children had a wonderful time at this summer’s overnight trips. In addition to the kids have a good time, pictured here are life vests and swim suits that KKOOM provided for the trips.

About a week later, in early August, KKOOM took the children to a nearby valley area for camping, swimming, and team building activities. KKOOM was joined by local volunteers from a Gumi church and a Gumi company, including some young adults who grew up at Samsungwon themselves.

KKOOM funds paid for the food, supplies and some transportation with additional support provided by the local volunteers. On the first day, the kids played in the cool valley river waters and enjoyed a delicious Korean barbecue in the evening. It was heartwarming to see the older kids play with the younger ones and look after them to make sure everyone stayed safe and had a good time. At night, the youngest children returned to Samsungwon.

The kids show off their new swimsuits and water shoes in anticipation of going on their summer field trips.

The older kids (6th grade and up) stayed overnight for 2 more days and participated in team building and leadership games that had an Olympics theme. The teams were named after countries the team captains chose: Republic of Korea, USA, Sweden, Greece and France.

The “events” included sports games, both in and out of the water, a talent show, photo and nature scavenger hunt, a trivia puzzle, and more. The teams also had  mentoring sessions with some of the local adult volunteers to discuss their future goals and plans. 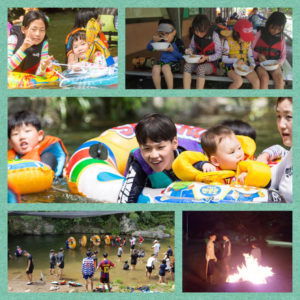 The kids thoroughly enjoyed themselves at camp and can’t wait for next summer.

One of the highlights of the camping trip was the bonfire on the last night, where the kids got to roast marshmallows and try s’mores for the first time.  Another highlight of the trip, according to the kids, was the endless provision of delicious food, which included pizza, fried chicken, ramen noodles and ice cream for snacks along with hamburgers and hot dogs for dinner on the second night. The kids said they had a great time, and asked whether they would like to go again next year, they responded with a resounding “yes”.

Helping kids who live in Korean orphanages have normal, fun summer experiences is just one of the things KKOOM is doing to help improve the lives of Korean orphans. We wouldn’t be able to do this important work without your help, and for that, we’re immensely grateful for your continued support.