Winter Break Well-Spent “Around the World!”

Working with KKOOM and returning to Samsungwon again after joining them for the 2018 Christmas party was something high on my list this year. At first, I was worried I might not get my chance to reconnect– my school was having an event on the very same day of this year’s Christmas party. Thankfully, I’ve had a few chances to head to Gumi and spend time at Samsungwon during the winter season, including an English camp I helped lead for the elementary and some middle school students!

English Teachers Fau, Stephanie, and Cliff, taught about traveling around the world through activities and games

For the camp, titled “Around The World,” three teachers led the different activities for the teams of twenty-one students. First, teams were tasked with building their own team tower using spaghetti, marshmallows, and tape. Through creativity and teamwork, the teams tried to beat the clock and construct the tallest Korean tower.

After building their masterpieces, we broke out the whiteboards and had world trivia! Here, the kids racked their brains about what they knew about the world and worked together to earn points. Students played some other small mini games like tongue twister races and word association activities. Drawing on what others knew in their teams and being overall a smart group of kids, they had a great time making their way through these short games.

One of the girl’s team finishing a task from the scavenger hunt. The children had so much energy running around the children’s home to be the first team to finish!

Next, and probably the highest energy event of the camp, was the scavenger hunt! Teams were sent to find specific items and take pictures of them. They also had to do different poses with their teams all around the children’s home. With jump poses and prompts like “Find I love you,“ the children had a great time doing fun challenges with their team!

For the last activity, we made glitter jars with the students! To make their homemade craft, they filled half a mason jar with clear glue, mixed it with hot water and glycerin, then poured in multiple colors of glitter! The results were mesmerizing, and the kids loved shaking up their jars well after the crafts were done! 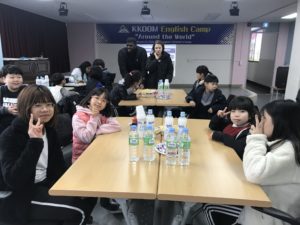 The students enjoyed the English Camp!

Being able to teach at Samsungwon gave me the chance to see the children in a different setting and expand how I see them. They aren’t just the happy, energetic kids from the Christmas parties and other events. They are hardworking students on top of that. Even at their age, they have educational ambition and drive to learn about the world that is inspiring to see shine through, even at a fun English camp.

Cliff Long is serving as a Fulbright Scholar in Seoul, South Korea, as an English Teaching Assistant, teaching at a school for North Korean defectors. He’s been teaching in South Korea for three years and graduated from Arcadia University with a Political Science degree. Cliff has served as a KKOOM volunteer since 2018, including Christmas parties for Samsungwon and Aemangwon Children’s Home. He  has a strong desire and passion to serve at-risk youth in South Korea. To read more about Cliff Long, you can read this featured article from his alma mater, Arcadia University.