In August 2018, KKOOM hosted Dream Camp for ten students from Samsungwon Orphanage. It was an opportunity for middle and high school students to explore Seoul for three nights, four days. For some of them, it was their first time taking the Seoul subway, asking a foreigner interview questions, or shopping in the Myeongdong district. We asked high school junior Geon to share his experiences during the camp, which has been translated from Korean to English. 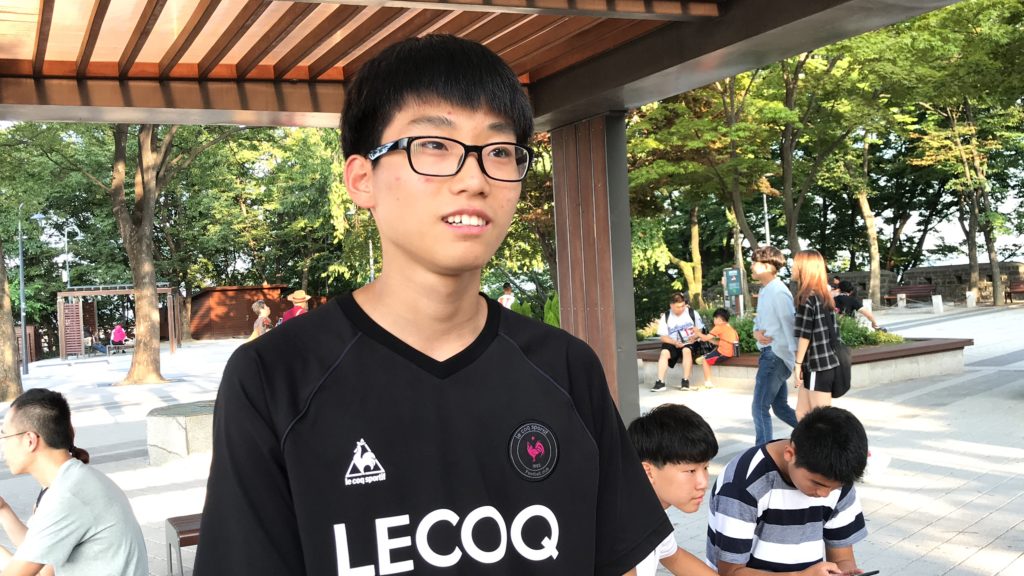 I was expecting to experience Seoul in a dream group. I took a train for 3 hours from Gumi Station on the morning of August 06 to Seoul Station. I greeted the teachers who came out and got off the entrance of Hongdae subway station. There were so many people coming to Seoul. We arrived at the guest house and were so tired of the hot weather. After we shared greetings, we had relaxation time in the air conditioning. I went to Hongdae street with the boys and two teachers, ate, and bought something and came back and decided on the name of the group. The girls team came back and made a presentation. The score was won by the women’s team. We named our team “Sons of God” and I was promoted to present. I spent one day like this. It was hot, but it was Day 1 that I came to Seoul. 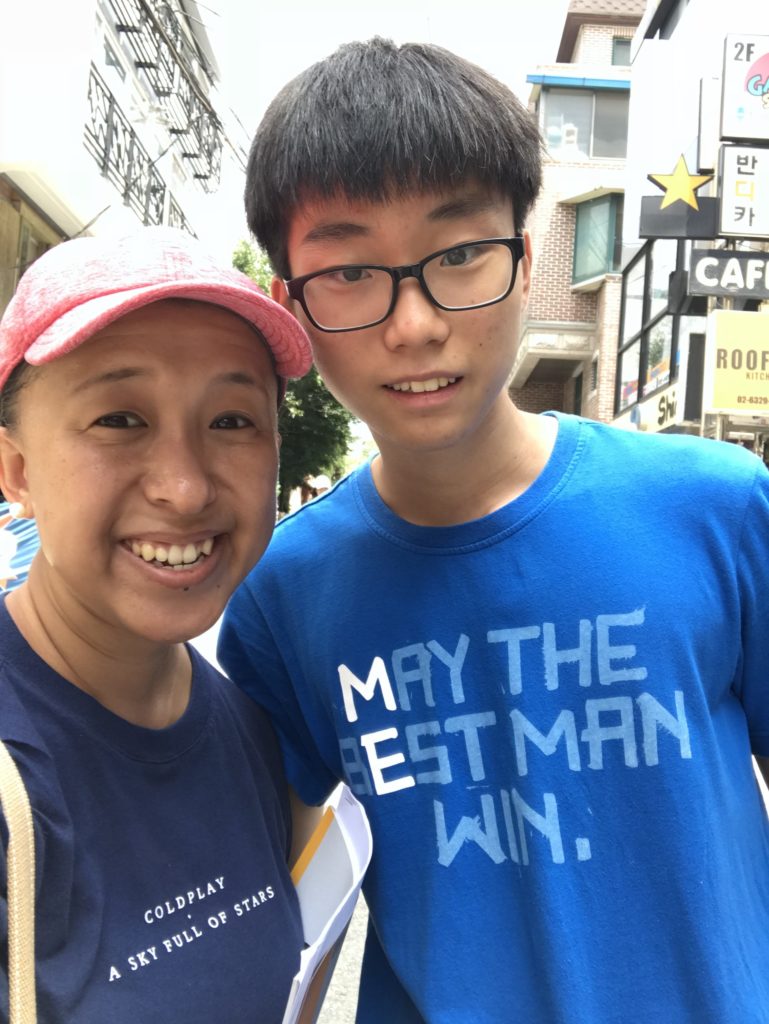 I found a building in Hongdae at Hongik University to look for library engineering building. It was my first time at Hongik University; it was very big but I found the designated place well. But it was too hot. After the scavenger hunt, I went into a foreign tea house and drank a cool tea and wrote about the taste of each tea I drank. We returned to the guest house and got lunch delivered, so it was amazing to have Seoul delivery. And I went to Han River in the afternoon. It was hot, but the feeling of running on the Han River by bicycle was the best. And we went to Anyang to visit my older brother’s house, someone who grew up at Samsungwon Orphanage. My brother and his wife prepared delicious food; I was impressed. We were really grateful for the good words that helped us how to eat rice and live our life. Thanks a lot and we returned to our guest house. Now we have learned how to ride a train and subway. 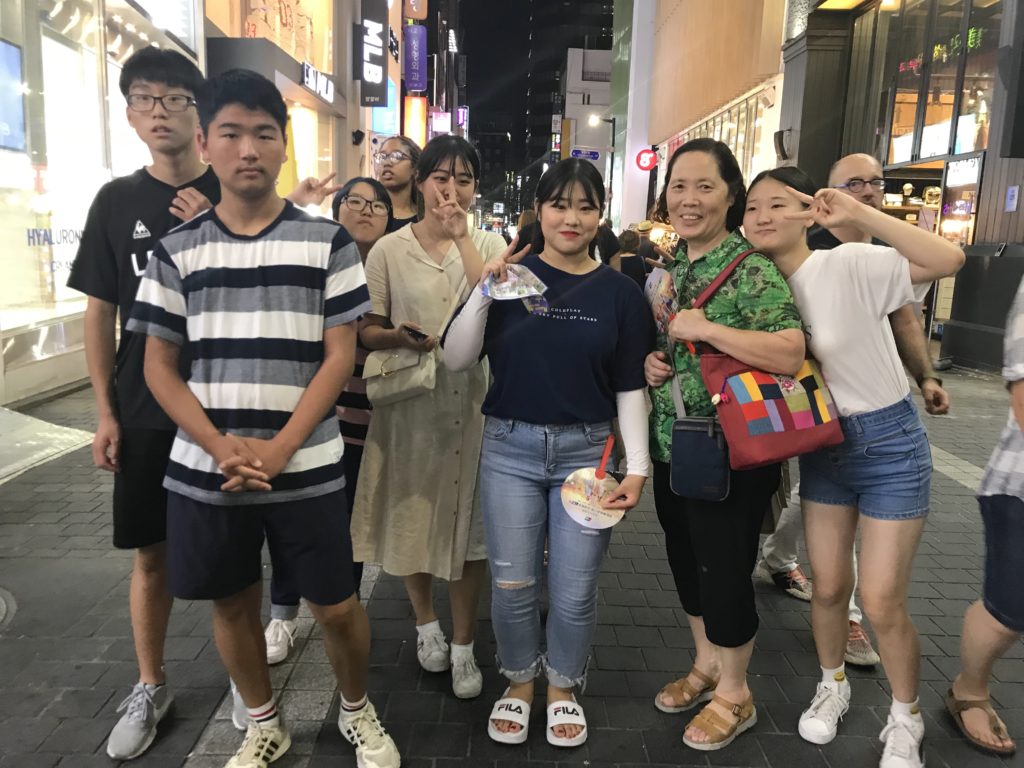 Day 3 – Namsan Seoul Tower
We went to Gwanghwamun to do the mission. I took a picture in front of King Sejong and found the mission place but could not do the mission due to the difficulty in finding the way. Still, I visited Cheonggyecheon, visited the city hall, and found things in Gwanghwamun. I had lunch at the guest house and had a break. I climbed a cable car to Namsan and played in front of Seoul Tower. The city of Seoul is well visible and cool. I ate delicious meat at a famous barbecue house in Myeongdong near Namsan Tower. There were so many people there. There are so many people in Seoul. After finishing the meal, I went to buy Mom’s gift in Myeongdong. I picked the owl key ring as a present for my mom. Other children seemed to pick presents too. The next day we visited Panasonic for a photography workshop and came down to Gumi. 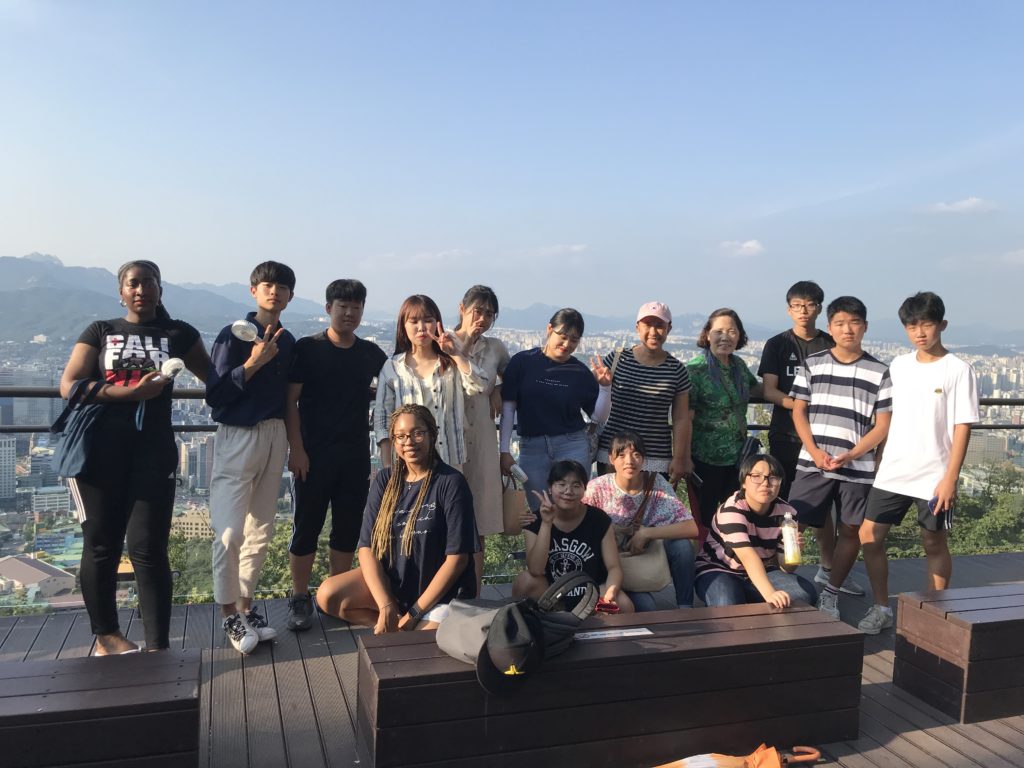 After finishing all the missions for 3 days, I thought it was good to come to Seoul and experience Hongdae, Gwanghwamun, Namsan, and Myeongdong which I had heard about. I enjoyed using the subway, transferring between stations and riding it. It was nice to hang out at the guesthouse, and most of all I remembered talking with foreigners before the subway ride to ask them interview questions. I would like to thank the group that prepared this Dream Camp and thank the volunteers and teachers.