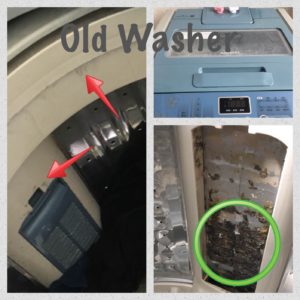 Images of an old washing machine at Samsungwon, which shows remnants of mold and wear.

In addition to providing Korean orphans with opportunities for education and fun experiences, KKOOM strives to improve the daily living conditions at the orphanage homes to help ensure the kids can have as normal of an upbringing as possible. In the past, we’ve purchased new furniture for the houses at Samsungwon [more], and last summer we repainted the “orphanage van” to look like a regular van [more].

We recently discovered that some of the washing machines at Samsungwon were covered in mold. No amount of scrubbing could remove it from the inside drums, which is where the children’s laundry was placed, sometimes up to four loads per day. One of the house moms told me that the kids’ clothes were not coming out clean, despite her use of specialty soaps and best attempts to clean the inside of the machine.

I originally discovered this problem when the Samsungwon staff asked if KKOOM might be able to sponsor an industrial-strength professional cleaning of the washing machines in each of the seven Samsungwon houses. After touring the houses and inspecting each machine, I determined that at least two of the washing machines were in poor condition, and professionally cleaning them was unlikely to solve the problem long term. The machines were nearly 10 years old and had been run every day, several times a day. We estimated that they had run nearly 10,000 cycles. It was time for a change!. 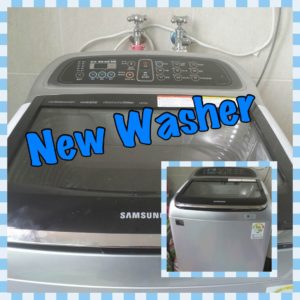 Brand New Washing Machines at Samsungwon = Clean Clothes for All!

So this month, KKOOM purchased two brand new, top-of-the-line, large Samsung washing machines and had them delivered and installed at Samsungwon, replacing the two oldest washing machines in the poorest condition. Each machine cost about $650 USD (they were on sale). The house moms now report that the kids’ laundry in those houses is coming out clean. The whites are actually white again! We plan to have the remaining five washing machines that are still in workable condition professionally cleaned this month. Budget-permitting, we plan to examine the need again next year, and if necessary, we hope to be able to upgrade more washing machines at Samsungwon in the future.

Growing up in a “regular” household, I know I didn’t have to worry about whether my washed clothes would be clean and whether they would smell like mold. If our washing machine broke, and I’m sure it did occasionally, my parents were able to have it fixed, and eventually when it was time to be replaced, they bought a new one. I know I took this, and many other luxuries, for granted. But now, as I look back on KKOOM’s work and the things we do big and small, I see our ability to “make life normal” for the kids in Korean orphanages as one of our highest callings and biggest responsibilities.

Actually, before I officially founded KKOOM with a small group of friends, one of my last unofficial acts was using leftover donations from generous individuals to purchase a commercial-grade dishwasher for Samsungwon in the summer of 2007. We did that for the same reason we just bought new washing machines: we wanted life in this Korean orphanage to resemble, even if just in a few small ways, life in an everyday household. Whether it’s clean clothes, a holiday party, or access to early education, this is what KKOOM is all about!