[Day #4] The Beginning of KKOOM – Reflections from Leanne Stein 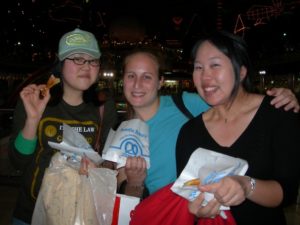 KKOOM Board member Leanne (in the middle) pictured with Fulbright ETAs from 2005-2006.

I have been involved in KKOOM since it started. I was a part of the Fulbright ETA program in Korea in 2005-2006 and lived in Gumi. Aimee had been an ETA there the year before me; she told me about Samsungwon and knew I wanted to volunteer there. While I lived in Gumi, I volunteered at Samsungwon, and it was often the highlight of my week. When the holiday season started to get closer Aimee told us how she had fundraised the year before, and so myself and the two other volunteers also fundraised. To be honest, I do not remember what that holiday party looked like or what we did; it was 16 years ago!

As my time in Korea wrapped up, saying goodbye to the house mothers and children at Samsungwon was hard. I returned to the U.S. and set about trying to figure out what I was going to do next. However, a part of my heart remained there. As the holidays approached again, the now five of us from the previous two years as well as the new volunteers living in Gumi fundraised again. As our network grew we realized we were able to raise more money to help the children. Soon the idea of maybe starting something bigger began to grow. 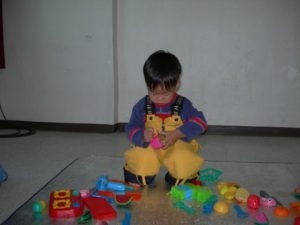 A photo from Samsungwon Children’s Home in 2005.

I remember Aimee calling me and saying she thought we should all start a non-profit. I think I said (or at least thought) something like, “can we do that?” But we had already proven that we could do it; that we could raise money and provide experiences and joy for the children at Samsungwon. And if we could do it there, how many other homes like Samsungwon could we help? I said “yes, I am in,” and that was that. I remember how exciting, overwhelming, and a bit “what are we doing?” it felt, but more than anything, it felt hopeful, filled with all our naïve ideas of what the future could look like.

All these years later, I am amazed at what KKOOM has become. The organization has changed over the years as we have worked on figuring out what our role should be, where we can make the biggest impact, and how to best fulfill the mission we wrote out 14 years ago huddled together in a café in Koreatown in LA. I cannot believe I have been on the KKOOM Board for 14 years, but I have remained on the Board because I believe in the work we do, the impact we can make, and the importance of education and enrichment opportunities. KKOOM can now stand on its own without its founding members, something that was always a goal Aimee and I spoke about years ago. Beyond what we do to make a difference, we are a sustainable and transparent organization. 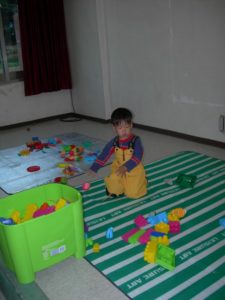 KKOOM has been improving the lives of Korean children officially since 2007, but the impact started in 2004 when Fulbright English Teachers decided to throw a Christmas party at Samsungwon

Seeing KKOOM evolve to where we are today has been immensely rewarding, but even more, knowing that KKOOM will continue to make a difference long after I leave the Board makes me immensely proud. Our current Board members are committed and passionate. They are the epitome of those dreams written down all those years ago in Korea town by a group of young, 20-somethings that wanted to make a difference and help the children that brought us so much joy when we lived in Korea. All these years later, seeing the children grow up and benefit from KKOOM’s work is the ultimate reward. Thank you to all of you who have helped support KKOOM and made that possible. Happy Holidays & Happy New Year!

-Leanne Stein, KKOOM Board of Directors