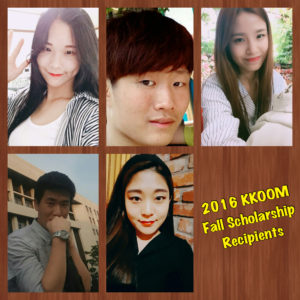 This semester KKOOM is proud to provide support to five college students in South Korea, all of whom grew up at Samsungwon, an orphanage in Gumi. We asked them all to give a brief update on how they’re doing and what they hope to accomplish this semester and in the near future. Read on to see what they had to say.

Eunbi, 2nd year at Gumi College, Major: Childcare.  Last semester, Eunbi served as a representative from her major to her college’s student council.  She said it was a good experience to learn about the school’s activities and be part of making small improvements to the college. During her summer vacation, she worked at a preschool, studied English and prepared for her licensing exam. This is Eunbi’s last semester before graduation, so she hopes to make the most of her remaining time and enjoy what is left of her college days. Finally, Eunbi says thank you to all of the KKOOM supporters who made her scholarship possible. She hopes to be able to give back to others in a similar fashion one day.

Mingyu, 1st year at Gumi College, Major: Hospitality and Cooking.  We’re proud to report that Mingyu had the best grades in his class during his first semester. He says he is still learning to master his knife skills, which are crucial to his dream of becoming a chef or baker. Mingyu hopes to be able to study and work abroad someday, perhaps in a bakery or dessert cafe.

Yeonhwa, 1st year at Yeungjin College, Major: Business Management.  After spending a year working at a travel agency, Yeonhwa decided to enter college this March, and she is a first time scholarship recipient this semester. She continues to work full-time while she goes to school, and her first semester, she maintained an “A” average. Yeonhwa would like to start her own business one day. She knows that it won’t be easy, but she is up for the challenge and believes her business classes will surely help her in the future. In her free time, Yeonhwa enjoys traveling and photography. She says that taking pictures helps her experience things in new and refreshing ways.

Sukyeong, 2nd year at Gumi College, Major: Dental Hygiene. Last semester, Sukyeong had an internship as a hygenist at a dentist’s office where she learned a lot and received praise for a job well done. Classes have not been easy for her, but Sukyeong has worked hard to improve her grades. While the KKOOM scholarship’s financial support is obviously helpful, Sukyeong says that just knowing that people support her is equally as important. She says that she will do her best to become a successful adult and be able to give back to others.

Jindong, 4th year at Pusan National University, Major: Business Administration.  As we reported previously, Jindong landed a coveted internship at Samsung Card over the summer. He says that it was hard to focus on classes while he was applying for internships, but he is happy that his hard work paid off.  This is Jindong’s last semester in college, so he is now busy preparing job applications. He will find out if he gets a job offer from Samsung Card later this fall, but in the meantime, he is also applying to similar companies. Over the years, Jindong has given KKOOM great advice about how to help others like him, and he hopes that KKOOM can continue to help inspire and support the dreams of other kids who grow up in Korean orphanages. Finally, Jindong says, “KKOOM has been a great help to my college experience, and I am truly grateful for all of the support!“