When KKOOM’s Chief Administrator traveled to South Korea in December 2017 to plan our annual Christmas parties at Samsungwon Orphanage and Emmanuel Children’s Home, she was most excited to meet the children. Leading up to this trip, the only thing she knew about them were information submitted in applications by their house mothers and photos of the children. Since her winter 2017 travels was her first business trip to Korea as Chief Administrator, she highly anticipated spending quality time at the orphanages.

The week of the Christmas party for 54 children at Samsungwon Orphanage, Grace spent time playing with the children in their individual homes, including our preschool scholar, HyungJun. HyungJun is 19 months old and arrived at Samsungwon in July 2018, weighing about 5 pounds below the average weight of a one year old. He is now thriving in a positive environment.

He loves to shake, shake, shake as he dances to music beats. There was pure joy on his face as he moved up and down to the music, while simultaneously clapping (the boy has rhythm!) Being shy is a part of his personality trait. Typically the only people he allows to hold him is his house mom and the boys who live in the same home. By the second day at the orphanage, Grace was able to hold HyungJun; the staff and his house mom said it was a breakthrough to see him opening up to an unfamiliar face in such a short time. 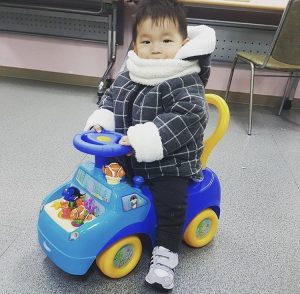 Although he had a cold during Grace’s visit (it was peak season for the flu), he was in good spirits. He rested peacefully as his house mom held him. While he did shed some crying tears when he received his Christmas gift from Santa, we absolutely love the photo of him on his new toy car that was purchased by our Chief Administrator sponsoring his wish list item through her personal expenses.

HyungJun is dearly loved at Samsungwon Orphanage. The older boys in his home take care of him with strong responsibility, greeting him immediately as they came home from school and wanting to hold him.

Without you, KKOOM could not send HyungJun to preschool. Thank you very much for helping to enrich his life. You have played a direct role in supporting his education; as he continues to be supported at the orphanage by staff, house moms, and the other children at Samsungwon, we are grateful you are investing in the lives of toddlers like HyungJun.